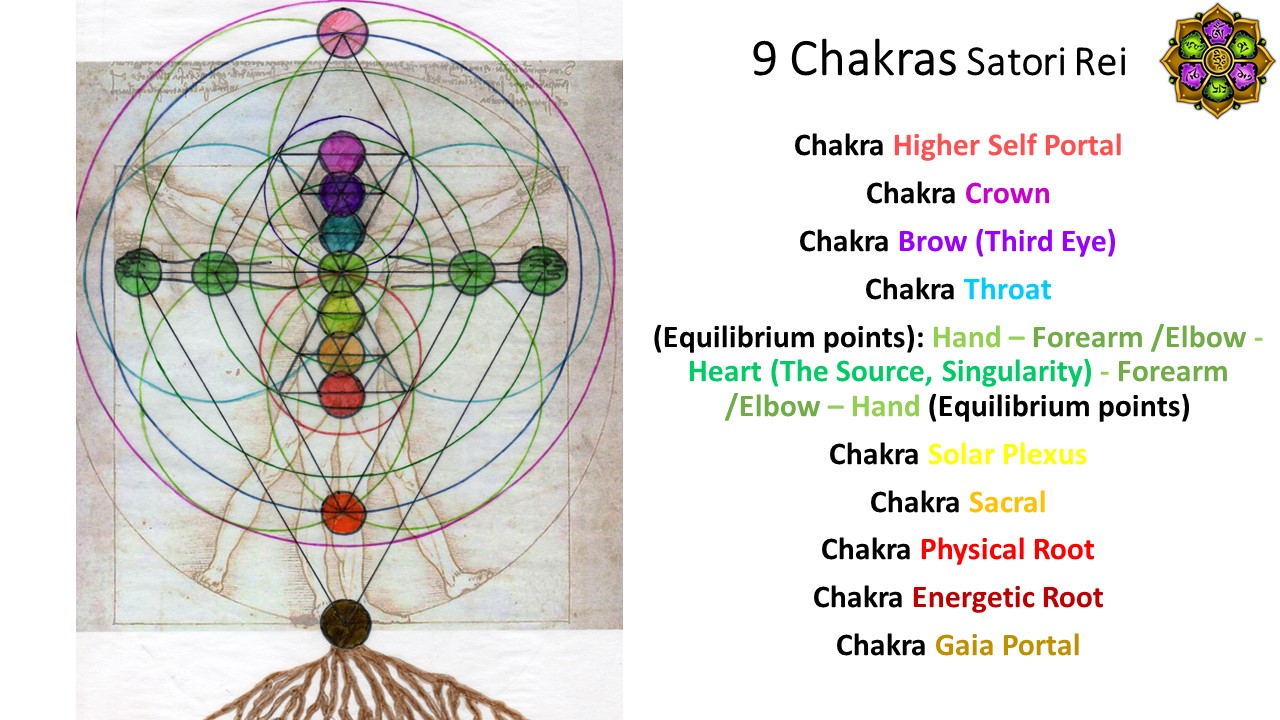 The Chakras are the focal points of energy input, which “feed “our body and its many functions, distributed along a center channel, the Prana Tube or Prana Canal, according to its function and dimensionality, its corresponding frequency.

The whole Creation, as well as the distribution of Chakras, obliges to the basic universal laws, for example the Law of Opposites (the Female and Male energies), sacred geometry and basic vibrational universal order, the rule of Three and the “divine signature “, the 9 Code. The universe expands in cycles of three fundamental elements, completing in phases, three cycles each, in that 3 x 3 equals nine.

The Chakras arise from a central point, the Singularity of the Heart. As we already know, the Heart is much more than a vital organ or one of the basic Chakras. The Heart receives power directly from the Source and not from the outside, as the normal Chakras do. It is the Heart that sets the Prana balance of the being, as well as the vital equilibrium points and output energy points, the elbows/forearms and hands. The Heart is not a basic Chakra, is the source of all our Chakras, the Singularity of our Creation, the micro cosmos within, the Source.

Following the order of Creation (3-6 -9), in the first cycle (3), arises the first three Chakras, and because we are energy based, the first three are of spiritual expression, of Feminine energy: the Throat Chakra, the Brown Chakra (3rd Eye) and the Crown Chakra.  Respecting the Law of opposites, present throughout the universal nature, their corresponding expressions, of Male energy, appear to maintain the universal Balance, expanding in the physical world, and to root the materialization of being: the Solar Plexus Chakra, the Sacral Chakra and Physical Root Chakra. Counting with the Heart Source, these are the well-known 7 basic “Chakras”. The second cycle (6) is completed, the cycle of duality, Yin/Yang, the two sides of the whole. The Vesica Piscis of the Flower of Life.

The last cycle (9) of the first phase represents the Universal Balance that maintains the dual state in perfect harmony, at the same time that ensures and roots even further the Being in both directions, to Gaia, the healing energy of the Earth, the physical basis, and the Cosmos, our constant spiritual evolution toward the infinite Cosmos. Thus, in direct equilibrium with the vital points of the forearms/Elbows, appears the Energetic Root Chakra. Its corresponding necessarily is originated, the Higher Self Portal Chakra. Finally, at this stage, is the Chakra Portal of Gaia, in balance with the vital points of the Hands, creating final Balance of Being, its basis of Creation.

Logically, the expansion of our energy system is constant and always proportional to its corresponding, and develops in both directions. But this is the next phase of Being, the Collective Consciousness in Unity state with the Universe. It is essential that we first understand the basis of the first phase, our base, and we learn to harmonize and feel our perfect balance. As we learn to walk, firmly before we can run and jump.

Eli De Lemos, is a modern philosopher, a published writer in 2016 in Portugal, naturopath and holistic Reiki Master Teacher, with a college degree in Biology/Geology. She is passionate for the Truth and thrives to share the fundamentals of Life, conscious self-healing and empowerment, for which she created her own self-healing reiki system, Satori Rei, The consciousness of Universal Energy. Born in the Azores islands, the remains of the Atlantis, in Portugal, where she currently lives and works as Reiki Master Teacher and a taking a Master in Volcanology.